Once, in a cheap science fiction novel, Fat had come across a perfect description of the Black Iron Prison, but set in the far future. So if you superimposed the past (ancient Rome) over the present (California in the twentieth century) and superimposed the far future world of The Android Cried Me a River over that, you got the Empire, as the supra- or trans-temporal constant. Everyone who had ever lived was literally surrounded by the iron walls of the prison; they were all inside it and none of them knew it. 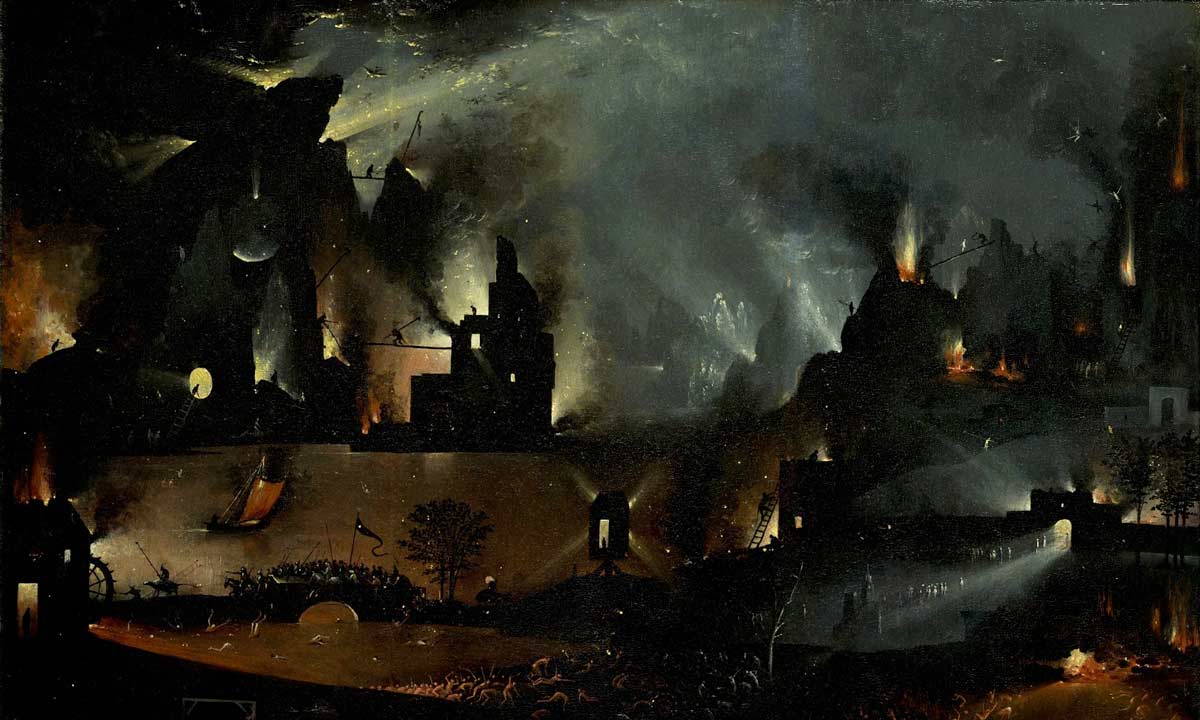 What is the Black Iron Prison? Philip K. Dick said that the perfect description is that of a timeforsaken place, blending past, present, and future, buildings cast in wicked black—where the “alien” from the sci-fi movies of that name might call home. As for my own vision of it, it was nothing like earth of the waking mind ever was, not at all; my memory of the place was distinctly of an otherworldly landscape. It had a consistent aesthetic, between each time I visited, though I think it may have been that the buildings and such details might have changed between showings. PKD also said that this was the true nature of the world, that we do not perceive the ’Prison has always had us caged within it. Which makes sense, why he thought of it in that light, for he saw it superimposed on our everyday reality. But like I said, I had a different tack: I looked out the window and I didn’t recognize anything, like I had been transported to… well, I wasn’t allowed to think it while I was there: I had been transported to Hell. No other word fits.

Was it just a hallucination? If it were purely one person’s imagination, that doesn’t explain why other people saw some version of it, too. Is it then something like an archetype, something hardwired into the human mind, if not brain—maybe the vision of it is hidden in everyone’s mental structure? Eternity seems to be some factor that is intrinsic in it: past, present, and future as one in the architecture, as Dick noted. I have described this elsewhere, that in Bosch’s Garden of Earthly Delights, in the third panel, “Hell”, there is in the far back a large building. I was in that building. That was where I was in the ’Prison, that exact place—what Bosch had entitled, “Hell”. If you look closely, too, you will notice that the building is partly in ruins, not a completely concrete object. How about that? It is a ghost building, a building only visible in a nightmare.

What do we make of Hell? Why is it that the world was supposedly locked behind the structures of it, then? As for it being the “bad place” of the afterworld, Hell wasn’t made by God. It is a perverse and twisted place, whose architecture is of pure evil; God has virtually no part in it, except for the fact that it originally was part of Heaven. Called the “ruined part of Heaven”, when Satan was cast from above, the place he and his angels had been residing they tore from greater Heaven and was given to the fallen angels as a separate realm. The reminiscence of Eternity is that timelessness one perceives. Even if, as it is written, it too shall one day have an end in the lake of fire. From the scale that Heaven operates on, it is my understanding that that ruined part of Heaven could easily envelop the whole of the world, whatever those dimensions might be as a noosphere, what I call the Halospace.

Is it real? If we understand reality as a shared experience, then it is real in that limited sense. Or perhaps in another limited sense, it is that archetypical representation of the dark side within human beings in general. If you will not allow a spiritual realm to exist, one might imagine it to be something like a place you go in dreams, or nightmares. Or could they be common hallucinations, like everyone seeing snakes when they take a specific psychoactive drug? It is a vision of darkness, in any case. It is a vision of all that is wrong in the world, if you ever do experience it, a merciless mood that makes up the stagnant air, the sensation: “abandon all hope ye who enter here”. But what if it were real, what would that mean? What if it is not completely in the eye of the beholder, but has separate existence apart from the observer? How does that affect the world? How would it affect your world?

If you wish deeper than what is writ here, faith is required of you, and reason. For it is not the end of faith when its object is plainly true; there will always be further that on that might be speculated upon, based on where reason seems to lead. And what is faith? “Faith is taking the first step even when you don’t see the whole staircase.” [Martin Luther King, Jr.] A leap of faith and a leap of insight are like fraternal twins. One may, in fact, use or confuse one for the other. Now, do we believe in the objective reality of the Black Iron Prison? For some, the question seems easy to answer: there is no place where it actually could exist, for it can only be a mental construct. But as we have said before, if it a shared mental construct—which at some level affects our psychology—if all of us follow the rails it puts down in our minds in a consistent way, then does it not in some way actually and really exist? Could we all of us be fooled?

The ’Prison is made of iron. Why is it iron, when we’re talking about it being in a shadow dimension, with no true substance to it at all? Perhaps that it is specifically black is the clue. Iron was perhaps the most useful metal that human beings have ever found. In itself, there is no evil—but black iron, that which is put to dark purpose, iron would be then the opposite of that utility, being instead being wielded of nefarious mind. It is then become the all purpose material of evil. That is the Black Iron. And prison? Perhaps you have heard, of this life: you can’t win, you can’t break even, and there is no way out of the game. Even without a strictly physical form, the Black Iron Prison is so named correctly. But surely, there are parts of the world, both human and of nature, that are not elements of Hell, right? How is it that PKD said it is the true structure of the world? And others have said it, too, that we are completely enclosed by it, the whole of the world is imprisoned… It could be that it all is truly is in the eye of the beholder.

Philip K. saw the BIP, and then saw his freedom from it, the “real world’s” freedom from it, in 1974 when President Nixon resigned. The king deposed without violence by the work of two artisans—or were they modern day knights? Yes, the world was freed, but only from the point of view of PKD. For I know that I myself witnessed the BIP years after he had left the world. And one fine day in May, 1991, I saw the world freed of the ’Prison, myself, on the other side of the dream barrier: in my mind’s eye did I see all souls escape. The ’Prison is gone for everyone, from my point of view. That means, however, that other people may be able to see it still. The Halospace has a weird way of working. But let’s think about this: Phil said that the Black Iron Prison is, at the guts of it, a system of control, a means of power for the archons of this world. That would be the Devil and his own, for Satan once tempted Christ with the rule of all the world, and he couldn’t have offered what was not his.

Phil thought, after he saw the mighty king deposed, that the saw the ’Prison regroup and reformulate itself in the gap that had been left. But it was not that which he saw happen—not completely. The hole that had been punched in it was a permanent one, and cover it up as they will, it is still there. Walt Disney is God. Yea, verily. But again, not everyone is free of the ’Prison from their point of view. The Black Iron Prison, ultimately, is most rationally perceived as a psychological construct, which limits our actions and our perspective(s) on the world. (Thus its ultimate reality.) What Phil and I saw in visions, and others, can be compared to a nice visual graph of a mathematical function. The real work of such a graph is in the equations that define it. That’s where the numbers are crunched. What is the Black Iron Prison, down where the rubber hits the road, where the functions live? It’s Hell. Yes, what we initially started with. But more precisely, it is the idea of Hell. And everybody has one.

Therefore, the rule of Hell over the world was broken in the minds of Philip K. Dick and me (and most likely others). And if you are reading this right now, its hold on you, too, is being punctured. Understand that the freedom afforded you is not to go wild, party all the time, and not to do a speck of work. It is not a freedom of the hedonistic kind. As above, the ’Prison is a psychological construct: the freedom is to free your mind. It is a freedom from fear. It is freedom to love. There is no specific rule to follow, except maybe the one common to basically all religions: love your neighbor as yourself. Otherwise, it is a freedom from the rules, too. And if you hadn’t guessed, maybe give a shout-out to Jesus, since it was he who set us free… And listen, we’re all of us neighbors to each other, especially these days, when distance is no factor in how we are all just that. And to love? Don’t you know how? Love is so simple, we’ll never understand it. That doesn’t mean we shouldn’t try.

From War in Heaven

Continue... My Vision of the Prison (The Nightmare) ⊳⊳

discover this, the truth...
that for every problem, any problem,
there is at least one solution

did you write the book of love?